Mediterranean food is in reference to the food found in the countries surrounding the Mediterranean Sea. And if you do not have a map readily available, we can tell you that it is a handful of countries, which means a handful of good foods fitting into one category. The countries that make up the entire Mediterranean cuisine include: Morocco, Algeria, Tunisia, Libya, Egypt, Israel, Lebanon, Syria, Turkey, Greece, Italy, Spain, France, and Portugal. That is a lot of countries, different styles of food, and great flavors making up one category of food.

At Baba Ghannouj Mediterranean Buffet, we take the best of the best and put it in our menu. And because we are a buffet, you get to try it all! That is a lot of food to indulge in. Let’s explore some of these countries cuisines a little further.

Not many people are aware that Lebanese food exists, or what it includes. But you have most likely eaten Lebanese food before, it is very similar to Greek food, however it generally has more spice to it. Due to Lebanon’s history, they have a lot of diet influence from other countries. But for the most part they have very similar dishes to Greece, and even more so Turkey. Their national dish is kibbeh, which is ground lamb, wheat paste, and spices. 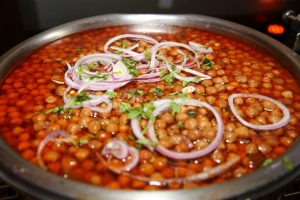 Moroccan food is generally a mix of flavors that you wouldn’t assume pair very well. But their use of spices with different flavors makes their cuisine unique and delicious. A popular staple in their dishes is couscous. They tend to use a lot of beef in their diets but chicken is also very common. The spices used in a Moroccan diet tend to be the fragrant spices rather than the spicy ones, such as cinnamon, ginger, and cumin.

An Egyptian diet is common to that of Greek and Lebanese, it features things like lentils, rice, chickpeas, pitas, and lamb. Rice and breads are staple foods in the country and foods such as cucumbers, grapes, fish, and poultry will be found in many meals. The Egyptian diet also incorporate a lot of macaroni. With some differences in the staples of typical Egyptian food, there are many things that are pretty common among the other countries that make up Mediterranean food, things like: falafel, kabab, and baklava for dessert. 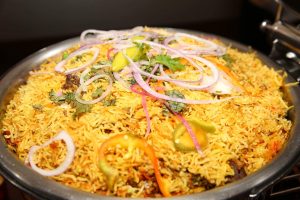 Along with Moroccan cuisine, Algerian food also features couscous as a staple food. Couscous dishes are often served with lamb, chicken, or vegetables. Again, history has influenced the diet in Algeria, and you can find foods that represent Turkish, French, Arab, and Berber diets in many of the dishes served in Algeria. The flavor can either be subtle or bursting with flavor, with common spices being saffron, ginger, cumin, parsley, mint, and many more.
With so many different countries influencing what most people know as Mediterranean food, it is surprising to think that many of them use the same ingredients and staples. At Baba Ghannouj Mediterranean Buffet, you can find all the flavors and favorites of these cuisine rich countries. Come in today to taste a bit of it all, and get cultured in the immensity of the Mediterranean diet.